Senator Hope Uzodinma, the All Progressives Congress governorship candidate for the 2019 election, has described the warrant of arrest issued against him, by an Abuja Area Court, as an effort in futility by political enemies and detractors, to dent his hard earned image.

The two time Senator for Imo West senatorial zone, in a release issued by his Senior Legislative Aide, Mr Ralph Nwosu, explained that some people, out of desperation to achieve their sinister motives, resorted to using a company that defaulted in the execution of a sub-contract it got from Nigeria Global to misrepresent facts and abuse judicial process.

According to the release, Chitek Engineering got a sub-contract to supply 1,700 sheet piles at Koko, in Delta state, on or before March, 2018, and a cheque of Two Hundred Million Naira, was issued to that effect, through UBA to transfer the monetary value to the company, on successful execution of the contract. “Chitek failed to execute the contract and still attempted to cash the cheque that was not issued in it’s name. When the cheque was rightly returned, the company went to court to enforce payment. They lost the matter at the High Court and also at the Appeal Court. The matter is presently at the Supreme Court”. He wondered why plaintiffs in a matter that is pending at the Supreme Court, still approached an Abuja Area Court that is lower in status over matters that involve Limited Liability Companies.

He further submitted that, the plot to issue illegal order of arrest against the Senator, was quashed by an Abuja federal High Court on Tuesday 6th November, 2018, and advised the public to ignore the rumour being circulated in the social media.

It will be recalled that a Kubwa Grade A Area Court, on Tuesday 6th November, 2018, issued a court warrant for the arrest of Senator Hope Uzodinma, for alleged issuance of dud cheque.

The presiding Judge Mr Mustapha Mohammed said, though the defendant’s counsel, Eze Oguaju was present in court, his client was absent when the matter came up on 11th September and was also absent when the matter came up again on 18thSeptember, despite his counsel’s promise to make him available, hence he issued a bench warrant against him and entered a plea of not guilty against the other defendants, in line with section 478 of the Administration of Criminal Justice Act (ACJA). The matter was adjourned to September 25th, 2018, for hearing, as there was no concrete evidence to indict Senator Hope Uzodinma.

Meanwhile, the distinguished Senator, whose name has been published by the Independent National Electoral Commission (INEC), as the governorship candidate of Imo APC, is expected to arrive Owerri from Abuja soon, to address his teeming enthusiastic supporters and party faithful on unfolding developments in the state and the way forward. 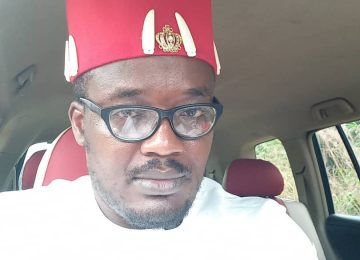 Obioma, Count Ozara Out Of Your Dirty Romance With Okolieogwo-Ozara PG