The Secretary to the Government of Imo State (SGI), Engr. Mark Uchendu, in a meeting held with representatives of the Owerri Amalgamated Traders Association on Tuesday 30thOctober, 2018, told them of government’s resolve to ensure that all traders who deal on general goods, within and around Owerri Municipality relocate to the new Imo International Modern Market, Egbeada, that is still under construction, as this is in line with government’s plan to stream line markets in Owerri.

According to the communiqué read by the secretary of the committee comprising representatives of the government and chairmen of various groups of traders, it was agreed that, traders who deal on general goods shall henceforth go to the International Modern Market, Egbeada, and vacate Douglas Road Owerri and all adjoining streets, while Alaba International Market shall be exclusively, reserved for trader that deal on electronics, computers, phones, other electrical and electronics appliances and accessories.

Avu automobile market shall be for cars, motor parts, and related accessories, and the Industrial markets at Naze and Umuonyeali, Mbieri shall be for timber and building materials only. The Relief Market, Owerri, shall be for food and general goods, while Ama-Hausa is to move to its permanent site along Nekede Road, Owerri.

Engr. Uchendu said, “to make this movement, possible, the governor has approved the sum of N20,000.00 for each trader’s movement”. The SSG further stated that the roads in Owerri are very bad and government has approved the rehabilitation of the roads, which will commence any moment from now. He said that traders at Douglas Road Owerri should vacate on or before 1st November, 2018 as a taskforce has been set up.

Though he said the Task Force will not be violent in their assignment, government wants a very peaceful movement. He also warned that there will be no more loading and offloading of vehicles or goods along Rotibi Street. Again the Ohaji market women will now be stopping at Waterside Primary School, and leave after selling their food stuff to retailers, as no retailing business will be allowed there. This arrangement according to Uchendu will help the public know where to buy their needs. The SSG finally instructed the traders to go and occupy shops of their choice at Egbeada as no rent will be paid until after 6 months. “They will start to pay rent of N5,000 monthly for the next 5 years. The rent may be reviewed, thereafter, as approved by the next government.

According to one Ifeanyi Onyema, Chairman Association of Patent Medicine Dealers, “the movement will affect the traders negatively because it will make them lose their customers. They have incurred a lot of expenses in constructing their counters, shops etc. Also the time given to them is short to enable them organize themselves. Besides, the roads that lead to Irette from Egbeada should be tarred and that of Hardel Junction should also be rehabilitated. Mr. Onyema however said that the arrangement is a welcome one because it is like that in other states but pleaded for time for necessary facilities to be put in place.

Other traders who spoke to our reporter on condition of anonymity vowed to resist any task force committee that will carry out such directives.According to them,the government is not sincere and has never fulfilled any agreement reached with traders.A moto spare parts dealer said,”Okorocha’s delights in subjecting us to hardship.Enough of that.We won’t allow such again”,he fumed. 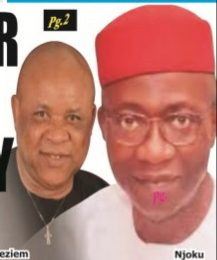 Posted by Watchdog Newspaper - April 13, 2021 0
v Represents Uzodinma at functions There are indications that the Deputy Governor of Imo State, Prof. Placid Njoku has again been…