Sources close to the former powerful Chief of Staff, Government House, Owerri, and son-inlaw to Senator Owelle Rochas Okorocha, who desperately battled for the governorship ticket of Imo APC before decamping to appropriate the AA, ticket, Uche Nwosu, have revealed that the AGBURU GROUP as fondly called are in disarray , presently.

This is as a result of the latest court judgement delivered in Abuja, yesterday which the source said has dashed Uche Nwosu hope of becoming Governor of Imo State through the petition he filed at the Governorship Election Petitions Tribunal, sitting in Owerri or thereafter.

Indications that he may lose out came to the fore when he was unable to enjoy his recent birthday ceremony and party in his own house, where his inlaws and wife were seen on video, dancing their hearts out.

According to the latest development, the Federal High Court sitting in Abuja,presided over by Justice I.E Ekwo, in Suit No: FHC/ABJ/CS/235/2019, between Action People’s Party (APP) and ANOR. VS. INEC AND 2ORS, yesterday nailed the aspiration of Uche Nwosu. The case was initiated by Ikenga Imo Ugochinyere, the APP National Chairman.

The judge ruled inter-alia, that the nomination of Uche Nwosu by APC and AA on 5th and 6th of Oct 2018 amounts to double nominations and therefore runs contrary to the provisions of section 87 of the electoral act 2010 as amended. He was consequently disqualified as candidate.

This landmark Judgment has finally collapsed and closed the aspiration of Uche Nwosu including his case at the election tribunal by stating that he was not even eligible to have been on the ballot paper in the first place. His case at the tribunal and imaginary hope of participating in a possible Re-run are now dead aspirations.

Uche Nwosu had joined Rochas Okorocha, as personal assistant. During Okorocha’s appointment as SA to Obasanjo on Inter-Party Relations, which was terminated abruptly, Uche Nwosu was sent to Imo State to share membership forms for the registration of Action Alliance (AA) between 2006 and 2007.

He was handy as one of the pioneer officials of AA before his boss Okorocha became Governor and appointed him first as Deputy Chief of Staff to Eze Madumere, Commissioner for Lands, Housing, Survey and Urban Planning, Chief of Staff, best serving political appointee with gifts of lands, cars and cash. 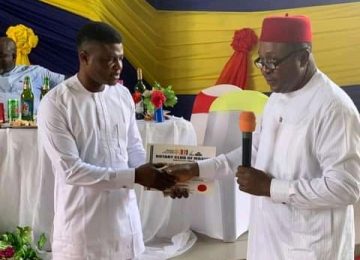 Posted by watchdog - October 28, 2017 0
Stakeholders in Into State last Friday reviewed the situation of things in the state with the verdict that the state…