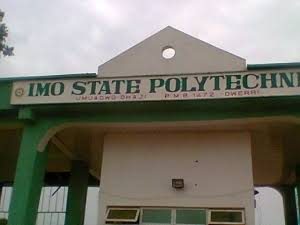 A second year Mass Communication student of the Imo Polytechnic Umuagwo has been reported to be expecting a baby allegedly to be fathered by a randy Catholic Priest, who doubles as a lecturer of the department. A close associate of the former Rector, the clergyman had some time ago allegedly impregnated the same girl and eventually terminated the pregnancy.

Sources close to the tertiary institution revealed that the female student whose name was simply given as Cynthia had earlier told her colleague that a youth corper was responsible for the pregnancy but later confided in her close friend that the Priest who impregnated her in 2019 which pregnancy was later terminated is responsible and had offered her money to terminate this one which proved difficult.

The victim on entry into the college was presumed to be a close relation of the Priest, a close associate of the former Rector, Rev. Fr Dr Wence Madu and had facilitated her entrance into the college.

Our correspondent reports that the unholy relationship between the Priest who is also a former HOD of the Mass Communication department and the student started when she was admitted into the Polytechnic and students and staff were made to believe that she was a relation of the Catholic Priest.

Investigation revealed that the student (Cynthia) acting on the orders of the randy Priest made several unsuccessful attempts to terminate the pregnancy and had therefore expected the Priest to find a way out.

At present,the way about of the catholic Priest is unknown.Another source said,”he may have traveled oversea leaving his victims here.He travels regularly which is why I suspect so”,he stated.

According to the source, another student of the same department (Christabel) also impregnated by the same Priest had to drop out of school and she is in her village now nursing a baby for the randy Catholic Priest.

Speaking on the matter, a student of the Polytechnic and a close friend of the pregnant Cynthia, who spoke to our Correspondent on the grounds of anonymity confirmed the report, but maintained that it is still a top secret.

“Yes; my girl friend Cynthia is pregnant. She confided in me that Rev. Father (name withheld) is responsible. She has made series of efforts to remove it, but it is not working. The man gave her money to remove it and she has been trying, but without success. She has told him to arrange to remove it himself, as her efforts are yet to yield the desired result. She still comes to school, but wears big gowns that will cover her stomach. She normally comes early to class before lecturers arrive, so that no one will notice”.

Speaking further on the randy nature of the priest, the girl said “I stopped going to my Church because of him. I am a Catholic, but the kind of things I am seeing are confusing me. Is this the kind of person I should go and kneel down to confess sins? Is this the kind of person that will take me to heaven? When I leave here, any Parish I see a decent priest presiding over, I will start worshipping there. If it is about these ones here, I will not go. How can my priests be sleeping with me? He (this same Rev. Father) has even asked me out before. This is not the first time he is getting my friend pregnant. The first time was in 2019, but he gave her money to remove it and she did. That same period, another girl in our department (Mass Communication) was pregnant for him. Every day, he will leave the school premises with different girls. My friend told me that when he gets home, somewhere behind Concord Hotel, Owerri, he will choose one and distribute the other girls to his colleagues or his fellow priests”.

Continuing, she stressed “when he was with us here in Orlu, no girl had any carry over. Even if you fail, he will tell you not to worry, that he will fix. That time, he had some powerful positions that enabled him lure girls. I know of people that failed French and some other courses that time, but none of them came back to write the carry over. They have all graduated. He will not even allow them to write any carry over. Sometimes, he will take them to his house, give them a separate answer sheet and allow them to write the exam again, with the help of notebooks and textbooks. He will then give them high scores. When lecturers return marked exam sheets, he will retrieve the original answer scripts and replace them with the one written in his house. That made him to have problems with some lecturers in the Department, who came out to condemn what he was doing with students”.

As revealed,the present rector,Mr John Mbadike is unaware of this development.According to the source,they are doing everything to hide the sad development from the present rector who obviously is not like Fr Wence who for the period he was in office condoned the impunity and immoral behaviours.

When contacted the Head of Mass Communication Department, Mr Osita Nwankwo who is said to be providing cover for his predecessor, declined to make speak on this scandal rocking the campus at Orlu but acknowledged that the department has been notified of the it and assured that they will investigate it.

All efforts to reach the suspected randy Catholic clergyman and two of the students were unsuccessful as their phone lines were switched off at the time of going to press.

Posted by Watchdog Newspaper - July 28, 2021 0
v  Says not the will of Nigerians A women socio political group in Imo State under the aegis of “Imo Women…