The member representing Ezinihitte Mbaise State Constituency in the Imo State House of Assembly, Hon Anyadike, who has been in hot exchange of words with the leadership of the House, has raised an alarm that the Speaker, Rt Hon (Dr) Chiji Collins, who he alleged is working hand in gloves with the Governor, has concluded plans to suspend him from the legislature, “because of his outspoken nature, principled stand on issues that concern the legislature and entire Imo people and zero tolerance for the several acts of cowardice, hypocrisy, double standard and ineptitude of the leadership of the state legislature that has according to him, derailed from the path of honour and quality representation for which they were elected.

Hon Anyadike in an exclusive interview with Nigeria Watchdog Newspaper, yesterday, said, “I have it on good authority that the Speaker told somebody who pleaded anonymity that, he has got the approval of the Governor to suspend me from the House. But, that notwithstanding, I own up every word I have said and will not, under any circumstance be intimidated or cowed to abdicate my responsibility as legislator who has the mandate of my people to be fair but firm, to uphold the truth and speak out against all kinds of injustice, oppression and hypocrisy at all times and in all places, without fear or favour”.

He said, “it has become an open secret that the Speaker and his allies have perfected plans to blackmail some of us that have refused to join the bandwagon, by becoming vessels of dishonor, mortgage our conscience and integrity on the altar of self aggrandizement, in a bid to suspend us to enable them have their way without being questioned”.

Continuing, he said, “I have become a target because I told Imo people the truth that State legislators are, as at today, owed three month salary and allowances, contrary to the lies and misinformation being peddled by some people”.

Recall that, Nigeria Watchdog Newspaper, on page 3 of it’s Tuesday, 30th June, 2020 edition, report where Hon (Barr) Anyadike Nwosu was quoted as saying that, his colleagues have reduced the state legislature to a group of praise singers, who have derailed from their noble assignment. He also insisted that, contrary to what the House Committee Chairman on Information and Judiciary, Hon Dominic Ezerioha, said, members of the House are still owed three months arrears of their salaries.

When contacted, the Special Assistant to the Honourable Speaker on Mediia, Comrade Emeka Ahaneku, said, “for Hon Anyadike to say that the Speaker is plotting to suspend him, depicts the saying that, the guilty is always afraid, because Hon Chiji Collins is presently not aware of plans by anybody within or outside the House to suspend Hon Anyadike or any other person. However, the legislature at both the National and State levels, have rules and procedure that guide and regulate the activities of members. It is unpaliamentary for any member of the House to address the press on issues that concern the legislature without the permission or approval of the House Committee Chairman on Information and Judiciary.

“Speaker, Hon Chiji Collins is a decent, responsible and experienced man who believes and adheres strictly to the rule of law and principles of democracy. He will under no circumstance, support or encourage the suspension of anybody who has not violated any law or committed any offence, neither will he condescend to the level of witch-hunting anybody for holding a different opinion on any issue”.

It was however gathered from a legislative aide who pleaded anonymity that, some aggrieved members of the Imo State House of Assembly are making moves to impeach the Speaker to enable them get at the Governor. According to him, “speculations are rift around here, that some people are lobbying and networking to ensure that they get enough signatories to enable them impeach the Speaker and ultimately, the Governor though, this is yet to be confirmed”, he concluded. 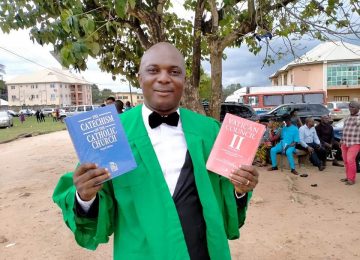 Posted by Watchdog Newspaper - September 29, 2020 0
The former Publisher of the Big Truth Newspaper, Owerri and the Senior Special Assistant (SSA) to the Governor of Imo…