The highly revered and vocal Prelate of the Catholic metropolitan Diocese of Owerri Ecclesiastical Province, Archbishop Anthony Obinna has spoken of his recent encounter with supporters of the present APC government in the state, at the burial of late Ezinne Juliana Mbata, mother of Chief Alex Mbata, Pro-Chancellor of Imo State University, Owerri.

The Prelate who briefly narrated what happened at the occasion to members of Imozurukwuo who paid him a solidarity visit on good governance at the Assumpta Cathedral, Owerri, acknowledged that he said Governor Okorocha has performed poorly and cannot be thinking selve with son-in-law, urging Imolites to resist any such attempt that through their PVC.

According to the Bishop, it was shortly after that, heaven was let loose and their supporters descended heavily on him for criticizing policies of governor querying why he should condemn Okorocha’s led government to the extent of almost fighting him.

It was further gathered that Bishop Obinna was at the funeral ceremony which attracted politicians, business tycoons and the clergy, specifically to honour Revd. Sister Mbata who is a daughter of the deceased.

During the homily and before the sermon by Revd. Fr. Paschal Mbagwu, the pontiff harped on the need for good governance, rule of law and need for improved welfare of the people, conducted the Catholic prayer for accurate electoral process “Ekpere maka ituzi iguzi na nkpoputa vote”.

In his sermon, Revd. Mbagwu reiterated the importance of good governance and also urged the electorate to ensure that they go to collect their permanent voters cards to enable them partake in the next general election and usher in a law abiding government of their choice.

The Bishop, while addressing the congregation at the church earlier, maintained that the incumbent governor was attempting to reposition his son-in-law to take over governance from him contending that he cannot do so.

He proposed that what Imo people need at this time is a seasoned technocrat who will right the wrongs and correct the several anomalies and hardship inflicted on the people by the present administration and not the Governor’s stooge who lacks the experience and maturity needed for such exalted office.

It was at this point that a young man in the church raised his hand and when the microphone was handed over to him, he stated “that the Okorocha government has performed very well and when the Archbishop resumed his sermon on good governance and perceived ills of the present administration and why Uche Nwosu cannot be governor, the members of Ugwumba Movement exhibited anger and bitterness. The members of the movement mainly youths were so irked that they almost lynched the Archbishop but for the quick intervention of members of the church who took time to calm the situation, it would have gone out of hand. 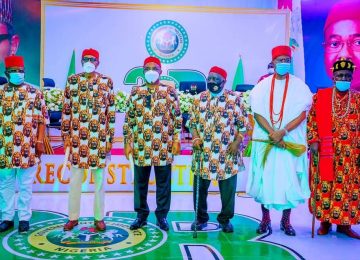 Posted by Watchdog Newspaper - September 10, 2021 0
– -As President promises to help fight insecurity  The visit of President Muhammadu Buhari to Imo state yesterday has been…