The Secretary of Association of Retired Permanent Secretaries in Imo State, Chief Fabian Agba, has called on the Imo State House of Assembly to promptly initiate impeachment process against Governor Rochas Okorocha for severally flouting provisions of Section 120 of the 1999 Constitution of the Federal Republic of Nigeria, as amended.

According to him, “if our state legislators know their duty and are alive to their responsibilities, Okorocha would not have remained in office till date, because he has consistently ignored the legislature, and taken them for a ride by disbursing the state’s funds without their approval, as provided in Section 120 of the 1999 Constitution” of the Federal Republic of Nigeria, which states that; “all revenues or other moneys raised or received by a state (not being revenues or other moneys payable under the constitution or any law of a House of Assembly into any other public fund of the state established for a specific purpose), shall be paid into and form one consolidated revenue fund of the state.

He stated that there was public outcry about the disbursement of the N26.6 billion bail out fund, and various tranches of the Paris Club debt refund funds that accrued to the state, which did not follow due process, where as, all such revenues, should constitutionally be deposited in a consolidated revenue account, pending appropriation by the house of assembly. But unfortunately Okorocha, unilaterally disbursed the funds without recourse to the legislature.

“For instance, when it was reported recently that he has pledged to spendN5billon out of the N12.6 billion naira, recently released to the state, for the payment of arrears of pensions and salaries, I considered it laughable. A governor who publicly denied owing pensioners and civil servants to now turn around and accept that he is indeed owing, is the height of inconsistency and lack of credibility. Besides, he does not have the power to disburse such funds without the approval of and appropriation by the state legislature which will only be implemented by the accountant general,not the governor”.

Chief Agba also expressed fear that the money which is the third tranche of Paris Club debt relief fund to accrue to the state, may develop wings and fly away, like the previous ones, including the bailout fund that was alleged to have been stolen from a bedroom.

He also frowned at the idea of asking retired civil servants to state their Bank Verification Numbers (BVN), blood groups and other irrelevant information in forms provided by the state government before they will be paid their next pension, stating that, they were never subjected to this kind of torture, pain and humiliation by any previous government.

The retired permanent secretaries’, scribe posited that the official records of all retired civil servants are in their files and they were thoroughly screened by the Auditor General of the state, in line with civil service procedure and the 1999, after which, they were duly issued with pensioners’ identity cards. He therefore, wondered the need for incessant verification exercises that are not only physically, psychologically and emotionally stressful to the sick, tired and ageing pensioners but also place financial burdens on them, as regards transportation, cost of photocopying documents, etc.

It will be recalled that President Muhammadu Buhari, at the inception of his administration in 2015, released bailout funds to states, to enable them offset arrears of pensions and salaries, for which Imo State received N26.5billion. The state government, set up a disbursement committee headed by the governor’s son-in-law who was then Commissioner for Lands. Shortly after, it was alleged that part of the money in hard currency was stolen from Uche Nwosu’s bedroom, by his Togolese cook.

The story published by the Community Watchdog Newspaper, resulted in several court cases between the newspaper outfit and the state government. The cases have lingered since then, with attendant harassment, intimidation and oppression of the management and staff of the outfit by agents of government. 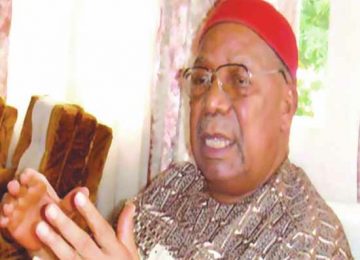 Mbazulike To Nigerian Youths: Fight For Your Future Now, Stop Being Cowards

Posted by Watchdog Newspaper - October 7, 2020 0
In the spirit of Nigeria’s 60th Independence Anniversary Chief Mbazulike Amaechi, of Anambra State a Trade Unionist and the only…

Posted by Watchdog Newspaper - September 25, 2020 0
The Imo State government has deferred the resumption of schools till an ongoing Covid-19 testing programme in all the 27…