The Senator representing Okigwe or Imo North senatorial district, and former Speaker of the Imo State House of Assembly, Rt. Hon. (Chief) Ben Uwajumogu has revealed that Okorocha’s statement that he was going to replace Senator Ike Ekweremmadu as Senate Deputy President, was aimed at frustrating him.

The Ihitte/Uboma LGA born senator, explained that Okorocha did not want him to succeed in the election but that his plans hit the rocks when he successfully won the matter in the courts and was incidentally inaugurated as a member of the red chamber of the National Assembly. He argued that there was no modicum or iota of sincerity of purpose in the whole agitation for his replacing Ekweremmadu, which project he said, started and ended in the media, because Okorocha could not go beyond the rhetoric.

As a result of the fact that he was seen as a threat to Ekwememmadu, “for six months in the senate, I was seen as a traitor. It was that bad. I couldn’t even be heard in the senate. Often times, my hands will be up for long but because the leadership of the senate had believed that I was out to destabilize the structure, they ganged up against me”, he declared.

Uwajumogwu described such level of conspiracy by Okorocha,a man he once revered and recognized as leader of the state as the height of wickedness. However, the ex speaker, noted that though he was experienced in the legislative business before his election, but the earlier issues he had both the court cases and efforts by the governor to frustrate him, made it unbearable to him. He has however overcome all that and now better positioned to serve his people.

He stated that his second term in the senate will place him in a vintage position to occupy sensitive positions so as to serve the people better. He also urged the South Easterners to vote for President Muhammadu Buhari, stating that, doing so will guarantee Igbo presidency, in 2023.

Speaking further, he averred that both the PDP candidate and his APC counterpart who is also a Fulani are not of Igbo extraction as such electing Buhari who has already served one tenure will serve the people better and bring to realization of Igbo presidency. 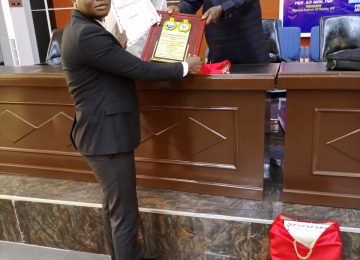 Posted by Watchdog Newspaper - September 27, 2021 0
Another prestigious honour has been bestowed on the founder of Ikukuoma Foundation, Dr. Summers V.C Nwokie on the 23rd of…