Over0 5,000 protesters, yesterday blocked the entrance gate to Imo State Polytechnic ,Umuagwo preventing entrance of workers and lecturers in or out of the school premises.

The protest march which they said will continue till government rescinds its decision to relocate the state owned polytechnic to Ehime Mbano and restores the polytechnic at its present location was massive.

Among the protesters were students and indigenes of the various Umuagwo communities who surged into the school premises as early as 9am on Monday and took over the activities at the main entrance gate.

The ASUP congress arrived at this conclusion after exhaustive deliberations on the state of affairs at the Polytechnic, Umuagwo and resolved as follows;

“1. Congress totally rejects government pronouncement on the relocation of the institution to Ehime-Mbano. The reason being that, stakeholders (Teaching and non-teaching staff, students, and host community) of the polytechnic were not consulted. The congress also sympathizes with parents and students, who will be affected by this relocation exercise.

2. Congress can no longer condone the continued delay in payment of February, March, and April, 2018 salary arrears, and re-affirmed their total rejection of payment of 80% salary which started from May 2018 till date.

3. They frowned at continued delay in payment of March and April, 2019 salaries.

5. Congress condemns in strong terms the continued withholding of her check off dues by Imo State Polytechnic management for twenty-three (23) months and demands the release with immediate effect.

6. Congress may consider taking legal actions, if urgent steps are not taken to address the aforementioned issues.

7. Congress cannot guarantee industrial harmony if the issues mentioned above are not addressed within seven (7) working days”.

An eye witness accounts stated that the protesters carried several placards with such inscriptions as, “leave Imo State Polytechnic, Umuagwo alone”, “establish your university elsewhere”, “we don’t trust a serial liar as you”, “how can you fund a university, when you cannot fund a common Polytechnic?”.

Though the protesters were not opposed to the establishment of a new university in Imo State, they do not see justification for relocating the existing polytechnic to Ehime Mbano, Ahiara Junction and others when all the governor should do is to convert the Mbaise, Ngor Okpala and Umuna campuses of Imo State University (IMSU) to the sites of the new multi-campus of Imo State University of Agriculture and Environmental Sciences, assuming Governor is sincere and had made concerted efforts to invest all the funds he used to construct a new police complex and prisons at Avu, in the campuses, which he reluctantly established.

According to the angry protesters, there is no reason for Okorochas attempt at formenting trouble by ordering students and workers to vacate Umuagwo for Ehime Mbano and Ahiara technical without facilities such as staff quarters, hostels, laboratories etc, whereas he had eight years to put all these basic requirements in place before relocating the Polytechnics, if need be.

Besides, they reasoned that a Governor would have taken all the time and resources to complete the new campuses of Imo State University of Agriculture and Environmental Sciences at Umuna in Onuimo and Aboh Mbaise/Ngor Okpala sites like he did for Eastern Palm University Ogboko where he allegedly diverted public funds under guise of relocating the head quarters of Imo State University. 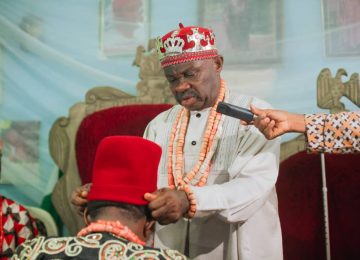