His sudden death is as attributed hunger, anger, frustration, starvation and lack of medical treatment occasioned by the non-payment of the statutory entitlement to the elder statesman.

It would be recalled that the former elected chairman of the union in Imo State, Chief Gideon Ezeji had died while still clutching a dud cheque issued to him by the Rescue Mission government late last year and was replaced with Chief Donatus S. Nwokedi.

Barely a few months after, the new acting chairman, Donatus S. Nwokedi died mysteriously (though a hypertensive patient), 2 days after signing a document as he was doing a protest of his members over the non-payment of their monthly pension which arrears had accumulated between 12-47 months.

Following the death of Chief Nwokedi, Chief J.D. Osigwe who was the unions Financial Secretary was appointed to sit-in as acting chairman of the union pending when fresh election is conducted for the surviving elder statesman and women, in the beleaguered state of Imo.

Many of the impoverished and maltreated pensioners who have cried out to the Chief Ihedioha led PDP administration to come to their help have expressed shock over the reported death of Chief Osigwe as well as several others who are dying in their numbers, across Imo State unannounced, expressing fears that their members will henceforth be afraid to take up the mantle of leadership of the union as state chairman.

Efforts to reach the family of late elder statesmen, proved abortive but a close confidant of the late chairman, Comrade Samuel O. Ojiaku said that the Imo pension union is in pains over the systematic death of their chairmen especially the latest one.

He contended that these deaths are not normal and there are speculations that something might be wrong somewhere and frowned at how some of their leaders die.

It would be recalled that in the last four years of the Rescue Mission Government of Owelle Rochas Okorocha, the Imo pensioners were selectively paid a certain percentage of their entitlement for three months at of one year leaving these retirees to resort to street begging and exposed to the vagaries of hunger, disease, and death.

Comrade Ojiaka disclosed that the union members had frowned at how some of the leaders decided to hobnob and romance with the immediate past administration to short change the pensioners who took their cases to God in prayers under the scorching sun and some notable holy places of worship for supplications.

He said, “we understand that our chairman was deceived into accepting to be part of the committee on payment of pensioners by the union secretary and we wondered how a pensioner in his right sense will accept to be part of a committee negotiating and planning to shortchange fellow pensioners”.

He accused the union’s Secretary, Mr Livy of colluding with Governor Okorocha to undo Imo pensioners.

When contacted, the secretary of retired Permanent Secretaries of Imo State, Comrade F.I Agba whose late wife was buried a few weeks ago, confirmed the death of the acting chairman and exclaimed “here was a man that attended my wife’s burial”, hale and hearty. He expressed deep sense of grief that the man should die like that. 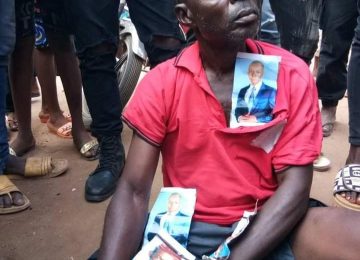 Drug Deal:I Never Made Comment In Defence Of Abba Kyari-Uzodinma

Posted by Watchdog Newspaper - February 17, 2022 0
The governor of Imo State, senator Hope Uzodinma has denied the rumour making the round that he is clandestinely working…

Posted by watchdog - February 6, 2018 0
I don’t mind to die as Rector – Rector Rev (Fr) Wence Madu By Martin Opara Some reverend fathers who…