– Calls on Ihedioha detractors to join hands to Rebuild Imo

A stalwart of the Peoples Democratic Party (PDP) in Ahiazu Mbaise Local Government Area and in Imo State, Chief Chuks Chilaka aka (Dikejiejemba), has felicitated with the good people of Imo State and Ahiazu Mbaise LGA in particular as Nigeria marks its 59th year as an Independent Nation.

The Ahiazu Mbaise born political leader and successful business man stated this while addressing Newsmen in his office in Owerri. He stressed that Nigeria as a Nation is still on the process of becoming a great Nation, as envisioned by its founding fathers and that all hopes are not lost.

Dikejiejemba maintained that Nigeria is a blessed country destined to succeed amidst several challenges facing the Nation, presently.

Chief Chilaka who is a member of the Imo State Transport Company (ITC) Management Committee called on all Imolites and the people of Ahiazu Mbaise to remain patriotic in their day to day activities and to shun those acts capable of disrupting the peace and unity the country requires to move forward as a Nation.

Speaking further, Dikejiejemba reiterated that Imo State is blessed to have a Governor who has the interest of all at heart in the person of His Excellency, Rt. Hon. Emeka Ihedioha and that the 2019 Independence celebration remains a special one in the minds of Imolites after the 8 years misrule of the immediate past administration in the State, emphasizing that the good people of Imo State are now happy to have a government they are part of. He opined that the recent tribunal victory of the Governor where he defeated the three major candidates in the election remains a clear act of God and a true reflection of who Imolites voted for during the 2019 governorship election in the State.

Chief Chilaka also used the opportunity to appeal to all Imo Sons who are still distracting the Governor, Rt. Hon. Emeka Ihedioha, through series of appeals to sheath their swords and have a rethink knowing that Imo State collectively belongs to everybody.

Chief Chilaka also reminded all oppositions in the State to buy into the Rebuild Imo Agenda in order to improve the socio-economic level of the State and as well wait for their own time when they will be elected by Imo people to serve as their Governor.

Chief Chilaka who is a Chieftain of PDP in Imo State is one of the leading aspirant in the forth coming Local government election in Ahiazu Mbaise slated to take place in December. He therefore charged every well meaning sons and daughters of Ahiazu Mbaise to continue to support the Rebuild Imo programme and policies of the State government to ensure that the government of Governor Ihedioha succeeds. 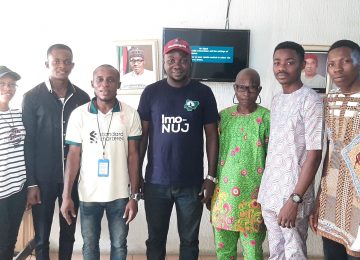 Comrade Precious Nwadike flanked by Orlu students when they paid him a courtesy visit, yesterday.

Posted by Watchdog Newspaper - October 4, 2022 0
“It is the responsibility of government at all levels to ensure the security of lives and property of citizens. Any…