The Interim Management Committee Chairman (IMC) of Njaba LGA, Hon. Chief Obodosha Agwubuo, has commended the policy direction and initiatives of the State Governor, Rt. Hon. Chief Emeka Ihedioha, the Omenkeahuruanya Mbaise, believing that by the time his tenure ends in 2023, he would have become the Omenkeahuruanya Ndimo.

Hon. Chief Agwubuo was addressing a stakeholders meeting of Njaba people on Sunday, November 3, 2019, when he made the above assertion and observation and went on to enumerate what he considers as the outstanding and remarkable achievements of Emeka Ihedioha. They include the clock-in-clock-out machine installed in the local government secretariat, which he said is a very laudable initiative of the Rebuild Imo administration.

The use of the machine has according to the Njaba IMC boss, gone a long way to checkmate ghost workers in the council area’s payroll. He also informed the leaders that the Governor has approved and paid natives of Njaba LGA, who are pensioners.

He had earlier informed the stakeholders of the ongoing constructions of a mini stadium and secretariat complex in addition to the installation of solar-powered electricity light at the local government secretariat and even beyond, all at the instance and promptings of Governor Emeka Ihedioha.

Another area of interest pointed out by the Chairman is the ongoing road construction across the local government area as directed by the Governor and informed the stakeholders of the prompt payment of council workers’ salaries.

Reacting to the IMC Chairman’s speech, Hon. Chidi Agbasi, who is a PDP Chieftain in the area thanked the IMC chairman for initiating and convening the meeting. He pleaded that the development projects should be spread across the entire length and breadth of Njaba , to give everyone a sense of belonging.

Agbasi pleaded for the empowerment of all party leaders and PDP loyalists, who fought during the last election and pledged their continued unflinching support and loyalty to the governments good intentions, initiatives and programmes so far.

Among those who attended the meeting, include Nze Kevin Okoro, who said the opening prayers, Chief Okey Durugbor, who blessed the kolanuts and Hon. Mrs Ngozi Uzoma, who said the closing prayers. 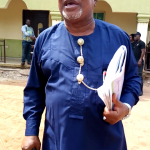