-My Hands Are Clean– Onyekanma

The Deputy Speaker of Imo State House of Assembly and member Representing Mbaitoli State Constituency, Hon. Okey Onyekanma, stands at a risk of impeachment over a recent N270 million scandal between him and a commercial bank.

As earlier reported,the contract scandal bothers on purchase of 27 2019 model prado jeeps for the officials use of Imo lawmakers whom as alleged,were supplied refurbished vehicles.

Sources close to the Imo Assembly leadership indicate that out of the N270 million approved by the executive for procurement of specific brand of jeeps, the lawmakers were supplied refurbished vehicles which development raised an eyebrow among the lawmakers.

The sources said that lawmakers are insisting that the matter be investigated and at the verge of petitioning EFCC.

“At a meeting of the bankers (Union Bank officials) and lawmakers held in Government House, over the weekend, a female banker revealed that they were paid only N34 million and not N37 million for each vehicle and tried to exonerate her bank from the fraudulent deal stating that those who purchased the vehicles should be held responsible.

As revealed, She indicted Hon Okey Onyekanma, as the kingpin. The statement of the female banker suspected to be part of the deal however infuriated the lawmakers from Ohaji/Egbema and Oru West, who were present at the encounter to attempt beating up the lady on their discovery that she was not among the top management team of the bank in Owerri.

When contacted on the new development, the House Committee Chairman on Information, Hon. Dominic Ezerioha said that contrary to the allegation of fisticuffs between lawmakers and the bank officials, nobody was beaten up.

He stated that what happened was that a meeting was arranged between the bank and the lawmakers at government house Owerri, but when they got to the venue, the people they met were not those they were expecting. “The lady in question was part of the team that brought the refurbished vehicles”, he said.

He continued, “we shall not stop talking about this until they change these refurbished vehicles . Nobody touched the lady, if anyone did, the courts are open for the bank. All we demanded was that the bank must change the refurbished vehicles they supplied to us. There are conflicting reports on the cost of the vehicles.We heard about N34 million each from the lady but the executive had approved N37 million for each of the vehicles. We can’t stop until our vehicles are bought.For now, the one allotted to me is parked in government house Owerri”.

When also contacted the Deputy Speaker of the State House of Assembly, Hon Onyekanma, said that the bank was not paid any money, adding that Union Bank provided the loan and provided the dealer/contractor that bought the vehicles. “It is a loan obtained from the bank to be serviced by the state government”, he uttered.

When asked if he has no hand in the scandal, he said, there is no way the executive will secure a loan and the legislature will come to executive the loan deal.

Efforts to reach Hon. Cyriacus Okoro-Heclus of Ohaji/Egbema constituency proved abortive. Meanwhile there are rumours of attempted impeachment of the Deputy Speaker over the alleged scandal.

The Assembly members are worried that whereas the Governor approved the purchase of a brand new prado jeep for each member at the cost of N37 million, what was supplied was refurbished vehicles, which ought to be much cheaper. 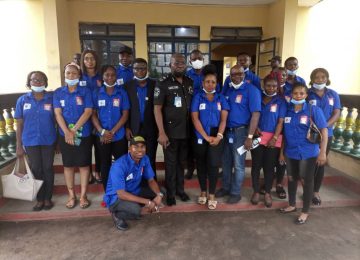 Aka Ji Ikukuoma Foundation team on a courtesy visit to Imo CP, recently.

Posted by Watchdog Newspaper - July 8, 2021 0
Lately, the state of Imo was enmeshed in a very serious security crisis that has never been experienced since it’s…