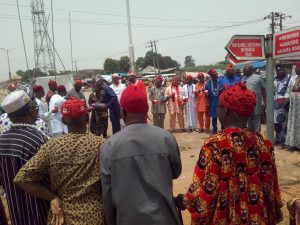 The Orlu zone Council of Traditional Rulers has once more affirmed its support to the Governor of Imo State,His Excellency, Senator Hope Uzodinma who is also an illustrious son of Orlu Zone.

In a meeting convened by the Chairman, HRM Eze Dr. E. C Okeke, Eze Udo II of Amaifeke Ancient Kingdom which held at Orlu LGA council hall over the weekend and was well attended by traditional rulers from the twelve LGA’s that make up Orlu zone, they resolved to throw their weight behind Uzodinmas government.

In his opening remark,Eze Okeke used the opportunity to observe a minute silence for all traditional rulers in the zone who passed on in the recent past.

He urged every Orlu son and daughter to support the administration and avoid being used by some individuals and detractors who do not wish the zone well in all ramifications in destabilizing the new administration and throwing the state into further turmoil and stampede.

Contributing, HRH Eze Pharm. E. C Nwosu, Okadike Owerri Umudioka Orlu moved a motion for the Orlu council of traditional rulers to move to Orlu local government round about to pour libation for their son and brother and pray for him to succeed in office and as well govern the state well. This motion was adopted through a voice affirmation by all the traditional rulers present at the meeting.

At the Orlu local government round about, the traditional rulers reiterated that Governor Hope Uzodinma is a God sent who came to turn things around for the people of the state. They maintained that Imo State council of traditional rulers has been made to pass through ordeals in the hands of previous governors in the state especially that of Owelle Rochas Okorocha who they said reduced them to errand boys.

Leading the prayer and pouring of libation as done for Ihedioha by Mbaise traditional rulers council previously, the Chairman, HRM Eze Dr. E. C Okeke, Eze Udo II of Amaifeke Ancient kingdom maintained that the Governor’s emergence as Governor is divine and that no man can change what God has destined for him and Orlu zone in general. He opined that he has no doubt in the ability and leadership of their son expressing confidence that he will govern the state well.

The traditional rulers equally called on all those trying to sabotage efforts of the present administration to realize that the state belongs to everyone. They therefore called on aggrieved groups and individuals to put the interest of the state first before their personal interest in order to move the state forward and invoke the spirit of the gods of Orlu forbearer and those of the four Igbo market days of Eke, Orie, Afor and Nkwo to pursue them, henceforth.

Posted by Watchdog Newspaper - June 21, 2019 0
A cross section of Imolites have called on the Imo State Governor,Hon. Emeka Ihedioha and the House of Assembly, to…