The former United Progressives Party(UPP) candidate for the 2019 general election, Comrade Nwadike over the weekend advised the south East governors, regional groups to revive the local vigilante groups to tackle the rising attacks of killer herdsmen in South East.

Speaking during a radio program with Ozisa FM 96.1 which was anchored by Comr Aku Obidinma,Comrade Nwadike expressed dismay over what he described as docility of the political class, saying that until the South East  governors and political leaders take a stand regarding the killings in South East,it will gradually get worse and nobody knows who will be the next victim.

Comrade Nwadike commended Bishop Obinna and the South East Town Unions (ASETU) led by Chief Emeka Diwe and other groups for being at the Vanguard of putting workable measures in place to protect the Igbos. He said that Bishop Obinna’s warning was timely and wondered why the governors haven’t taken any drastic measures in stemming the tides of insecurity in the land.

The journalist and publisher of Watchdog Newspaper recalled how in the past, the local vigilantes were veritable instrument in fighting insecurity and wants the Igbos to return the arrangement as the surest way to protect the people of the region.

Speaking further, Nwadike stated that anyone who is in doubt of the presence of killer herdsmen in South East must be in the dark or playing dirty politics with the situation on ground. Among other cases, Comrade Nwadike mentioned the gruesome murder of a farmer at Agwa in Oguta Local Government area and berated those concerned on the manner they handled the matter. “More annoying is hearing that the Association of Fulani Herdsmen will compensate family of the diseased as if the dead has less value”, he stated.

Comrade Nwadike urged the leaders to borrow a leaf from South West governors who would usually eschew partisanship when it comes to addressing security challenges affecting the people in the area. He said such is different in South East where politicians play politics with lives and property of their people. 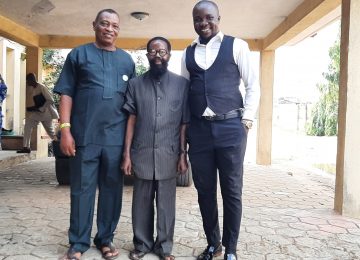 Posted by Watchdog Newspaper - April 16, 2021 0
Chief Ben Osuagwu, a veteran journalist and former chairman of the Nigeria Union of Journalists, in Imo State at a…

Resumption of Imo Schools:Ministry Of Health, To Conduct Community Testing Of 27 LGAs Ahead Of Time

Posted by Watchdog Newspaper - September 29, 2020 0
By Martin Opara Imo State Commissioner for Education, Prof. B.T.O Ikegwuoha, has thrown more light on  why schools in the…