An Imo based activist, Paulcy Iwuala, has called on the Inspection General of Police (IGP), Mohammed Adamu, to begin the process of reforming the force and to initiate policies that would improve the living standards of officers and personnel.

Iwuala was reacting to the disbandment of the operatives of the Special Anti-Robbery Squad (SARS) by the Inspector General of Police, on Sunday, following protests from Nigerians against the activities of SARS operatives in the country.

Iwuala who commended the IGP for ending SARS, said that the entire police force needs a reform to end all forms of brutality on the people from the police, personnel against those they were engaged to protect and secure.

Iwuala who led a protest for police reform in 2018, said that only a total restructuring of the force could change the face of the Nigeria police.

He insisted that that members of the force are underpaid and lacking good welfare package from the federal government.

“I commend the IGP for the steps taken so far in the wake of the protest. But it is not enough, we want the police system reformed.

“When I organized a protest for police reforms in Owerri two years, the mission was to re-train police officers in the act of policing and to let the Federal Government see reasons why the welfare package of members of the Nigeria Police Force should be drastically improved.”

He continued: “Most policemen do not even know a section of the Police Act. But sometimes you don’t blame them. They are hungry and less appreciated for the efforts they put in tackling crimes. I am not encouraging police recklessness and professional misconducts, but how much is the salary of an Inspector of Police? Any Housing scheme for them? Are police children in Nigeria offered scholarship as obtainable in neighbouring countries like Ghana? Does the government conduct routine mental test for policemen? I believe that a police man that is well paid won’t find joy in standing under the sun, collecting N50 from motorists.

Until we reform the force and prioritize the welfare of members of the force; corruption, bribery, crime that characterise the force may not be solved. And to contribute my quota in reforming the police, I’ve purchased about eighty laptops to start computer literacy program for police children. We need the government to support us”.

Iwuala, founder of “Genius Eyes International Foundation for the Hopeless”, who urged protesters to maintain decorum while pushing through their demand to rebuild the force, expressed optimism that the Nigeria police will soon turn a new leaf.

Police Arrest Man Who Raped, Impregnated Own Daughter In Imo

Posted by Watchdog Newspaper - May 13, 2020 0
The Imo State Police Command has arrested a 47 year old man Uchenna Egbuchulem, for raping and impregnating his own… 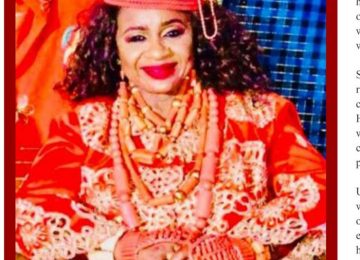 Posted by Watchdog Newspaper - April 15, 2022 0
·       As Umuonyemaobi Family felicitates with her There is no hiding place for a gold fish and honour is given to…