A concerned Imo citizen and former House of Representative candidate for Orlu,Orsu and Oru East Federal Constituency, Dr. Barr. Ikenna Ihezuo worried by constant traffic congestion in Imo State which is capable of stalling the state economy has called on the state Governor Senator Hope Uzodinma to establish a “traffic control agency in the state to curb the menace and use the same agency to generate funds to increase the state dwindling internally generated revenues.

In an open letter to the governor which copy was made available to the media, Barrister Ihezuo observed that the traffic congestion in the state may render the economy redundant if nothing is done now to checkmate and control the menace.

He commended the Hope Uzodinma led government on the efforts it has made to construct new roads in the state but stressed that the government should take cognizance of the fact that the good road network would not be of any benefit to commuters in the presence of traffic congestions that may affect the economy of the state positively or negatively depending on the mode of operations.

The learned gentleman observed that the removal of roundabouts in parts of the state capital and subsequent welcome replacement of traffic lights in the city. “There is urgent need for the re-orientation of commercial drivers and other commuters in the state who find it difficult to obey simple traffic lights and signs.

It is for this purpose that he suggested the establishment of a traffic control agency that will be charged with the responsibility of arresting and prosecuting traffic offenders, citing example with Rivers and Lagos States where such offenders are subjected to psychiatric tests in addition to payment of fines to the public coffers.

Barrister Ihezuo reminded the governor that both local and foreign investors invest in places with minimum traffic congestions as punctuality is the sole of business.

He was of the opinion that the time or periods of heavy trucks or lorries into the state capital should be regulated.

Posted by Watchdog Newspaper - November 6, 2019 0
Perhaps, it has become a shameful norm that every Governor of Imo State, considers as top priority the sacking of… 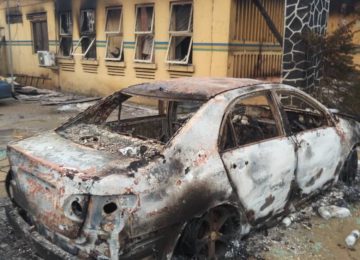