It was expression of rage over the weekend when the publisher of Nigeria Watchdog Newspaper, Comrade Precious Nwadike and Barr Lawrence Nwaetiti featured on a phone-in program of Ozisa FM radio station to discuss the effort of the Imo State government to recover government property that were allegedly converted to private property by the past administration of Rochas Okorocha.

The 2 hour program which was anchored by Comrade Aku Obidinma had so many callers expressing happiness that the old IBC quarters has been eventually recovered by the present administration.

They called on Senator Hope Uzodinma to consider other areas captured in the recently released and gazetted whitepaper and ensure that they are all recovered. This they said will serve as a deterrent to other emerging leaders who may follow the foot prints of ex-governor Rochas Okorocha.

Among the callers were Chief Ben Osuagwu, former chairman of the Nigeria Union of Journalists NUJ, in Imo State, Barr Ifeanyi Olumba, former Chairman of IBC board and TC chairman of Orlu LGA. They all spoke in condemnation of the conversion of the IBC quarters to a private property.

Ben Osuagwu also used the opportunity to lash at those who now delight in attacking journalists in Imo State. He said, the practitioners haven’t had this kind of experience before and called on government to halt further attack on Imo journalists.

It would be recalled that the government of Imo State last week sealed off the old IBC quarters, Orji, in line with the recommendations of the White paper on land and other issues.

Subsequently, Okorocha’s supporters began to advance argument that students of the college have been made stranded following the sealing off of the IBC premises, in a bid to arouse misplaced sympathy.

This prompted the reaction by majority of Imo people that Okorocha who before he became governor had his collage e along Onitsha road but later converted same to a business premises while using his position to eject retirees from the IBC quarters and taking over same without considering the plight of those he ejected. 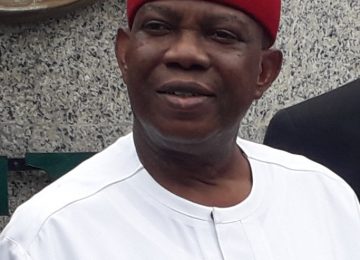