Following the controversy elicited by the allegation that some unscrupulous elements cornered and misappropriated the sum of N7.5m paid as rent by 9 Mobile in respect of the mast at Ugwu Ekwema, the ancestral home of the people of Owerri Municipal Council popularly called, “Owerre Nchi Ise”, for which some people are being accused, the Head Office of the telecommunications company has exonerated the President General of Umuihugba Umuodu autonomous community, Sir Ferdinand Anoruo KSJI, MNIS, C.E.O, Ferdinand Survey Consult of complicity, stating in very clear terms that the money which is rent for 10 years was actually paid to the erstwhile President General of the defunct Owerri Community Assembly (OCA), Felix Ngoka.

Investigation by this reporter revealed that the mast with IHS No. 0004B (Imo) was mounted and registered in the name of Owerri Community Assembly, OCA, which became defunct after the creation of the five autonomous communities who now have separate  traditional rulers and Presidents General.

A top management staff of the Lagos office   of the telecommunications giant who spoke to this reporter on condition of anonymity said, we paid the sum of N7.5m in 2019 as rent for 10 years in respect of the 9mobile mast located at Ugwu Ekwema to Chief Felix Ngoka who we have in our record as the representative of Owerri Community Assembly (OCA), in whose name the mast was mounted. We are not supposed to pay another rent until what we have already paid expires in 2029.”

When told that Owerri Community Assembly has ceased to exist because the community has been split into five autonomous communities with different traditional rulers and Presidents General, the source said “we have not been formally informed about that. If that is the case, the community should write us and request for a formal change of status and representative.”

Some residents of the community who commented on the development expressed dismay at what they referred “to as the malicious and reprehensible conduct and attitude of some people who take delight in falsely accusing, maligning and damaging the hard earned image and reputation of some illustrious sons of the community without taking time to investigate and find out the truth of the matter.”

It would be recalled that an Owerri based tabloid, in its Friday November 12, 2021 edition, published an advertorial sponsored and signed by Soronnadi Unegbu, Innocent Akunna, Tony Nwaneri, Tony Udemba, Elder Sunny Unachukwu, and Elder Chukwudi Nwabaraocha accusing the President General of Umuihugba Umuodu autonomous community, Sir Ferdinand Anoruo, a seasoned Licenced Surveyor and manager of men and resources of having collected and misappropriated the sum of N10m paid as rent by 9mboile for the mast at Ugwu Ekwema.

Others who also commented on the development wondered “why Chief Felix Ngoka whose tenure had expired before 2019 still went ahead to allegedly collect the said money on behalf of the people without informing any of the traditional rulers or Presidents General who are the genuine  representatives of the  people.”

It is the height of criminality that Ngoka who handed over to Chief Anukam (Oweaya) still parades himself as President General of OCA that is now defunct”.

When contacted, the Chairman of Presidents General in Owerri Municipal Council, Amb Jude Agbugba a former Commissioner in the Imo state Judicial Service Commission and Imo State Chairman of Para Power Lifting Association, who did the state proud in the recently concluded national sports competition by winning 3 gold, 3 silver and 1 bronze medals. said, “I am not aware of the payment of such money for rent or any other purpose. I also know that none of the Presidents General is either involved or aware of such. But if it is actually true that somebody did such a thing, it is condemnable and the person should be held responsible.”

When also contacted, Surv Anoruo and members of his executive expressed happiness that the truth has finally been unveiled. “Our sons and daughters at home and in Diaspora who have inundated us with phone calls since the enemies of the community raised the false alarm in a bid to shield their cohorts, divert attention and hoodwink the people now know who to hold responsible for the reprehensible and atrocious act.”

It was also gathered that, “under normal circumstances, money realized as rent from the mast and other revenue that accrues from any source at Ugwu Ekwema  which is the ancestral home of Ndi Owerre belongs to the five autonomous communities who should collectively decide how and what to do with it. But unfortunately some people decided to be fraudulent. If care is not taken, they will incur the wrath of the gods aside other consequences which will trail their action as the leadership of the five autonomous communities will soon meet to deliberate and take a stand on how  to address the anomaly which if not checked will become an unpleasant precedent.”

Some youths of the community who have threatened a show down with those they referred to as moles and clogs in the community’s wheel of progress warned “Soronnadi Unegbu, Tony Udemba, Tony Nwaneri, Innocent Akunna and their cohorts to desist from fanning the embers of disunity, rancor and acrimony or incur the wrath of the people who have taken enough of their nonsense.”

Efforts to reach Chief Felix Ngoka for comment proved abortive as his phone was switched off. 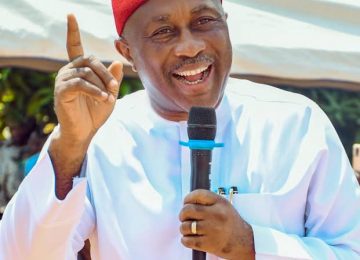 Onyeagucha To OPOCA:I Won’t Apologize To Uzodinma, He Must Give Account Of Innocent Killing killed Under His Watch

Posted by Watchdog Newspaper - July 29, 2022 0
By Martin Nwoko The former Secretary to the Imo State Government and the People’s Democratic Party (PDP) senatorial candidate for…