There appears to be no respite in sight for the embattled senatorial candidate of All Progressive Congress for Owerri zone, Prince Alex Mbata, as a group known as Every Child Education Advancement Foundation (ECEAF) has petitioned the Inspector General of Police, calling for the  prosecution of the business mogul turned politician for lying on oath.

The group, prior to the primaries of the Imo State Chapter of the All progressive Congress, wrote to the party’s screening committee, requesting that Prince Mbata be disqualified from participating in the primaries on the grounds that the Government White Paper on the activities of Imo state university, Owerri indicted him for complicity in the questionable abandonment of TETFUND projects in the tertiary institution, despite the enormous resources provided for their timely completion.

ECEAF in a release signed by its Director of media and publicity , Comrade Dominic Nwankwo also stated that it would seek legal redress if Prince Mbata for any reason, emerges as the APC senatorial candidate for Owerri zone.

The group, in a bid to make good its threat, in a petition dated June 17, 2022 written on their behalf by their counsel Nelson.O. Chukwuezi Esq, of N.O. Chukwuezi and Co, addressed to the Inspector General of Police, The Nigeria Police Force Headquarters, Louis Edet House, Abuja, called on the Police to investigate the allegation of perjury leveled against Mbata.

ECEAF also urged the police to critically look at Prince Mbata’s candidacy in view of his indictment by the Government White Paper on the activities of Imo State University under his watch as Pro- Chancellor and Chairman of the University’s Governing council.

The petition, captioned, “Lying on oath by Prince Alex Mbata, APC’s Senatorial candidate for Owerri Senatorial District, Imo State” reads in part, “We are solicitors to the incorporated Trustees of Every Child” Education and Advancement Foundation (ECEAF),Imo State who we shall hereinafter refer to as “our clients” and on whose mandate and instruction we write you this letter.

The letter further stated that,”Our instruction shows that Prince Alex Mbata was the Pro-Chancellor of Imo State University sometime ago under the administration of former Governor Rochas Okorocha. At the end of his tenure as Pro-Chancellor, a Visitation Panel was set up to investigate the affairs of the University under him as the then Chairman of the University’s Governing Council. After the conclusion of the Panel’s work, Imo State Government accepted its Report and published same on its White Paper of 28th July, 2020. In the said White Paper, Prince Alex Mbata was indicted for:

“(i)           unilaterally changing and replacing the consultants for the University’s TETFUND projects from Three-Dimensions (3-D} Consultants to Mayfeir Projects Ltd., Abuja without approval and contrary to laid-down procedures by TETFUND, and which change of consultants impeded the project evaluation for earned certificates.

(ii)          Unexplained withholding of funds from TEFUND by the University for earned certificates.

(iv)        Involvement in the brouhaha leading to the unlawful termination of the appointment of the then the University’s Registrar and the concomitant suit in court etc.

“Our further instruction shows that the said Prince Mbata perjured himself when he failed to disclose this fact in his Expression of Interest Form which he submitted to INEC for the position of one In Imo State. (A copy of the said Form is hereto annexed.) Our clients demand that this mailer be Investigated by your office m view of the fact that lying on oath is an Infraction of the taw under the Nigerian  legal system. It is our clients’ belief that the upper legislative chamber of the National Assembly ought to be occupied by men of  integrity and candour. Our clients have no doubt in their minds that your office has requisite capacity to do justice in this matter”.

It would be recalled that Prince Alex Mbatas emergence as the candidate of All Progressive Congress for Owerri zone has, aside the perjury issue, continued to elicit mixed reactions from several quarters, especially among his co-contestants who are saying that the process through which he emerged was neither transparent nor credible. 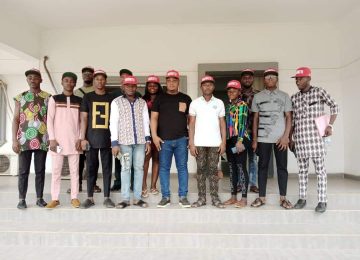 Posted by Watchdog Newspaper - May 27, 2021 0
Sequel to the determination, effort and persuasive presentation of the Caretaker Committee  of the Nigeria Union of Journalists, Imo state…