The Deputy National Chairman of the United Progressive Party (UPP), Chief Sir Ejike Uche (Dimkpasaa) yesterday posited that his party will spring up unexpected surprises in the forthcoming February 16, 2019 presidential elections. He urged the Imo electorate especially those in Imo West senatorial district to be careful in casting their votes in order not to waste them and equally adopt a paradigm shift in their polity in order to achieve maximum beneficial results.

Chief Uche who paid the UPP senatorial candidate for Imo West a visit to his office in Owerri, yesterday, upheld that there will be surprises in several quarters as viable, and credible youths across the nation are poised and prepared to take over the mantle of leadership for real affective change that has been long desired.

He advised the Imo electorate to avoid the mistakes of the past and avoid casting their votes for the moribund, recycled money-bag politicians who are not ready to adapt to changes for public interest but are prepared to purchase result dearly for their own selfish interest.

Speaking during his visit to Comrade Nwadike, the UPP National leader, described it as a solidarity visit to a young desirous politician who has shown capacity, capabilities and dexterity with zealous patriotism, to turn things around and serve the people.

He observed that so far, Comrade Nwadike has done well in his dealings and urged the Orlu electorate to rally round him for new ideas and innovations in leadership and politics, rather than for the sake of money, recycling old crafty politicians who after elections do not add value to their lives. He was optimistic that Nwadike would deliver on his promises and urged the electorate to trust him.

He disclosed that both the state and National body of the party are impressed with the candidate and are ready to rally round him with all maximum support so as to achieve victory.

He however re-iterated the need for a paradigm shift to the younger generation in politics to move in tandem with modern democracy for effective optimum results and repeated his appeal to the Orlu electorate to mobilize support for Nwadike for the sake of the Orlu people.

Responding, Comrade Nwadike expressed appreciation for the solidarity visit by the party chieftain. He pledged to increase the tempo of his campaigns in order to ensure that UPP wins the Orlu senate, come Feb. 16, 2019.

He was optimistic that the youths, artisans and women groups within the Imo West senatorial zone, need and will support him.

Posted by Watchdog Newspaper - April 23, 2018 0
Sequel to a release issued recently by the Orlu Political Action Committee (OPAC), insisting that anybody from the zone who… 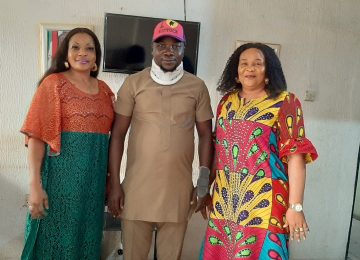 Delegation of EziadaImo on a solidarity visit to Comrade Precious Nwadike