v Accused them of holding night meetings against Speaker

Following the suspension of 6 Imo Lawmakers on Thursday, July 8 by the Speaker, Rt. Hon. Paul Emeziem, over what he termed un-parliamentary conducts of the erring members, the Chief Whip of Imo State House of Assembly, Hon. Barr. Obinna Okwara has condemned the criticism against the Speaker, stressing that the insinuation of incompetence against the Speaker is baseless.

He also averred that the disciplinary measure taken against some lawmakers is part of the House rule and never started with the present House of Assembly.

The People’s Democratic Party caucus in the House led by the Minority Leader, Hon. Anyadike Nwosu who represents Ezinihitte Mbaise State Constituency during a media briefing in Owerri accused Emeziem of incompetence and acting out the script of Governor Hope Uzodinma aimed at compelling the PDP members of the House into joining All Progressives Congress, APC in order to silence opposition in the 9th Assembly.

Addressing newsmen in his office, the Chief Whip of Imo State House of Assembly, Hon. Barr. Obinna Okwara alongside the Majority Leader, Hon. Kanayo Onyemaechi and the Deputy Chief Whip, Hon. Eddy Obinna dismissed the allegations made by the PDP Minority Leader stating that they were mere insinuations, propaganda and blatant falsehood.

Speaking further, the member representing Nkwerre State Constituency revealed that the 6 lawmakers suspended at one point or the other were involved in unparliamentary conducts.

He hinted that one of the suspended members threatened to shut down Imo Assembly until he is satisfied while one also threatened the Speaker in his office that the day will be his end as the Speaker of 9th Assembly maintaining that most of the affected members lost decorum of use of words among members of the House. Hon. Okwara also revealed that some of the suspended lawmakers were holding nocturnal meetings against the House at night which he said didn’t go down well with the entire house members.

He also cited that during their plenaries when questions were put by the Speaker for those in support of house deliberations to say Yes or those against to say Nay, non of them will say anything but after plenary some of them will start granting press conference and visiting radio stations to talk against house decisions and rulings taken on the floor of the House.

He insisted that he does not know why they are crying at this time stressing that disciplinary actions did not start from 9th House but was also the case in the 8th House.

The Chief Whip maintained that it became necessary for the House to be put in order because there is order in all aspects of life. He reiterated that the house rule as amended empowers the Speaker to punish any erring member of the house and also that one of the suspended lawmakers co-sponsored the house rule to give the Speaker teeth to bite when necessary.

He therefore advised the suspended lawmakers to approach the Ad-hoc Committee set up by the Speaker to look into their matter knowing that they have erred in one way or the other and as a family, all the issues will be resolved.

In his words “we have not declared war against anybody but we are saying that there must be discipline”.

Responding on the issue of Imo Assembly becoming an appendage of the Executive, the Chief Whip reminded those in opposition that legislators were elected to make laws and not to fight the executive, and in that regard they are expected to help the government of the day to serve Imo people better to ensure that it excels.

He further described the situation at the Imo House of Assembly as an internal affair that should be treated as such by those suspended.

The Nkwerre lawmaker insisted that there is nothing wrong with the leadership of 9th Assembly as presently constituted.

Legislature Under Our regime Won’t Be Rubberstamp-Irona 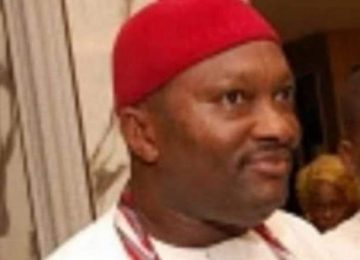 Chidi Ibeh To Ihedioha:You Can’t Be The Only Cock That Crows In Mbaise