The deplorable state of affairs in Imo state, nonpayment of accumulated salaries, pensions and gratuity with the attendant poverty, hardship, lack and deprivation have continued to attract the attention of well meaning citizens including a human rights and advocacy group known as Imolites For good governance which had through  a release signed by its National Convener, Chinonso Uba (NONSO Nkwa) accused the Hope Uzodinma government of insensitivity and lack of vision.

The release, captioned “for the records, Senator Hope Uzodinma’s government has failed the people”, noted that it is disgusting that the Imo State government under Senator Hope Uzodinma has decided not to pay Imo state workers and retirees their accumulated salaries and pensions, as a result of which most of them are dying of hunger, lack, deprivation and inability to afford their drugs and other medications.

The release reads,“It has become obvious that this government has no future, good plans or sympathy for Imo workers and pensioners most of who are owed upward of 16 months salaries and pensions, despite series of verification exercises.

“There are indications that the present government is happy seeing Imolites suffer for things they should ordinarily enjoy without stress. Even the Rochas Okorocha government that paid 70% did so as and at when due.”

“The question is, what willsthe Governor, his deputy and members of their kitchen cabinet benefit from the hardship they are subjecting Imo people, especially workers and pensioners in the state to?”

“Its a truism that the governor and his deputy receive their salaries every month without stress plus their security vote and other allocations running into millions, yet paying these dying Imo Workers and pensioners their peanuts is a burden and a problem to them! This is sheer wickedness and heartlessness.

“These workers have families, extended families and dependants who rely on them for their needs.

To this end, Imolites for Good Governance (IFGG) has taken the bull by the horn by coming to the rescue of these dying Imo Workers whose salaries have remained with the government since March 2020 till date.

This is not Politics; it is for Humanity! Those who are yet to receive their salaries and allowances since March, 2020 should send their names and addresses to 09013382841.” 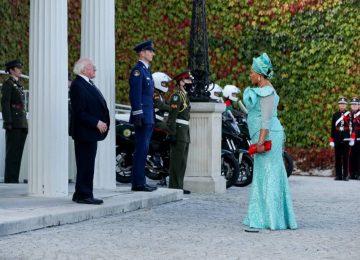