The former Publicity Secretary of All Progressive Congress in Okwuabali ward of Orlu local government area Desmond Tochukwu Ugwumba who recently resigned his position and membership of the party has described the much orchestrated eight billion naria (N8billion) youth empowerment programme which the governor Hope Uzodinma administration has severally claimed to be one of his major achievements as a scam aimed at deceiving the people to score cheap political points.

The former APC spokesperson also deposed to an affidavit of facts at the High Court Registry, Owerri on January 12, 2022 to further give credence to the allegation.

Ugwumba who in his petition condemned in very strong terms, what he referred to as governor Uzodinma’s government fraudulent disposition, said, I want to formerly bring to your notice the seemingly fraud committed by Gov. Hope Uzodinma led government  In the alleged Imo State empowerment fund supposedly N8b as being claimed by the State Government.

You would recall that the governor at an official event claimed to have spent N8b on empowerment of Imo youths in cash and logistics but none of the acclaimed and shortlisted beneficiaries received the fund as startup capital.

The petition reads in part,”It is imperative for your good office to investigate this obvious fraud as the 15,000 supposed and shortlisted youths did not receive any fund in

“For avoidance of doubt, I am under oath and I will make available the shortlisted beneficiaries phone numbers of 15,000 youths who were said to have received N250,000 each amounting to N4b.

“Similarly, there were other group of youths the state government in partnership with federal agencies trained in 3 days workshop on skill acquisition and they were promised of N2m, N5m and NI0m as their individual proposal entails as startup capital but none of the individual youth received the money after 10 months of the said scheme.

“On page 34 of a speech made by Gov. Hope Uzodinma at the state stakeholders meeting on Tuesday January 4, 2022 at Imo State Government House Owerri, the state governor said that his government spent N8b on youth empowerment. He continued to explain “that … we have trained over 30,000 youths in different skills. We have also started different enterprises for them. This exercise has cost us a whooping N8b.

Our youths have been set up in self employment with a potential economic value chain addition that will certainly boost the state’s economy.”

“Please there is a strong indication that some official or official of state government or bank official had diverted the said fund as none of the alleged beneficiaries received any money via their bank account number.

Kindly investigate and direct the government officials to funish your office the details of payment with accurate dates the said fund was paid to the individual beneficiaries for accountability, transparency and probity.”

He also stated same in the affidavit of facts captioned,“Re: Fraud Alert“ which he deposed to at a High Court Registry in the Owerri Judicial Division. 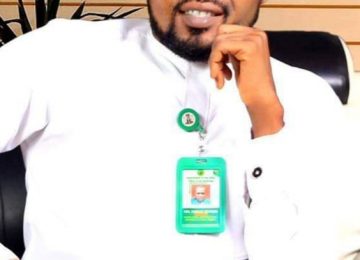 Ebonuma Thanks Uzodinma For Approving Subventions To Special Citizens