It will be a ceremony of colours and funfare this Thursday, May 5, 2022 as the Federal Polytechnic Nekede rolls out the drums to host dignitaries storming the institution for the commissioning of an ultramodern Bankers Hall donated to her by the Chartered Institute of Bankers of Nigeria (CIBN).
The 160-capacity edifice which is tastefully furnished and equipped by the Institute will serve as a lecture theatre, demonstration class and conference hall for the Department of Banking and Finance of the Polytechnic. It will also function as one of the multi-purpose centres of the institution.

According to the pragmatic Rector of the Polytechnic, Engr. Dr. Michael Arimanwa, “The CIBN ultramodern Bankers Hall is a legacy project which the Institute donated to our Polytechnic based on our track-record of performance in both the linkage agreement signed with them and as an institution. We have always tried to distinguish ourselves as an educational institution, a reason the National Board for Technical Education (NBTE) rated us the best-forming Polytechnic in Nigeria while the Joint Matriculation Board (JAMB) rated us the most-sought-after Polytechnic in Nigeria. I am very happy with the CIBN project sited in our institution as it is indeed one of the six built across the six geo-political formations of the country. U arguably, the project will further spur us to action.”
Leading the team of CIBN to the event are the President and Chairman of the CIBN Council, Dr. Bayo Olugbemi, and its Registrar/Chief Executive Officer, Dr Seyi Awojobi.

Expected at the epoch-making event are the Governor of Imo State, His Excellency, Dist. Sen Hope Uzodinma, who is the Special Guest of Honour, Chief Emmanuel Iwuanyanwu (Ahaejiagamba Ndi-Igbo), State Controller, Central Bank of Nigeria, Sen. Ezenwa Onyewuchi, Sen. Frank Ibezim, Hon. Ikenna Elezianya, Hon. Uju Chima Kingsley, Hon. Chike Okafor, Prof C.U. Njoku and a host of others. The edifice is symbolic as it is the first lecture theatre to have been donated to the Polytechnic by a corporate organization.

The donation of this phenomenal edifice would not have been possible without the inspiring and purposeful leadership of the Rector, Federal Polytechnic Nekede, Engr. Dr Michael Chidiebere Arimanwa. It was the Rector who thoughtfully sustained the Linkage with the CIBN as initiated by his predecessor, Prof C.U. Njoku.

Ever since he assumed office as the 8th substantive Rector of the Polytechnic, Engr. Dr Michael Arimanwa, fondly called the digital/smart Rector, has not relented in building and sustaining viable linkages and collaborations with relevant local and international organizations.

For the records, the Polytechnic under the dynamic administration of Dr Arimanwa has built and sustained partnerships with Zinox Computers, Lofty Farms (Lome, Togo) and Institute of Chartered Accountants of Nigeria (ICAN). Others include Innoson Vehicle Manufacturing Company, International Fund for Agricultural Development (IFAD), Leventis Foundation, V.N. Karazin Kharkic National University and Lviv University of Business and Law, Ukraine and of course, Chartered Institute of Bankers of Nigeria (CIBN), among others. The collaborations, according to the Rector, are geared towards strengthening institutional framework and promoting academic excellence in the foremost Polytechnic.

The inauguration of the Bankers Hall this Thursday at the Polytechnic is yet another significant milestone of the administration of Engr. Dr M.C. Arimanwa, who only last year received an excellence award from the Tertiary Education Trust Fund (TETFund) for being the only head of a tertiary institution in Nigeria that substantially utilized research funds allocated to his institution. Shortly after, he was given an award as Public Servant of the Year by the Nigerian Union of Journalists. He has also been given awards as best Rector in two different occasions.

Only recently, Dr Arimanwa was enlisted by the Federal Government of Nigeria as a technical member in a committee for the development of electric vehicles in Nigeria. In less than four years as Rector of Federal Polytechnic Nekede, Engr. Dr Michael Arimanwa has engendered a most ambitious infrastructural and technological transformation in the Polytechnic which only time will define.

Under him, the Polytechnic now boasts of beautiful access roads, new lecture complexes, well-equipped laboratories and workshops, expanded curricular, a refurbished medical centre, a revamped library system, an integrated staff development plan, a resuscitated Polytechnic Radio station, new inventions, a clean environment and a rejuvenated microfinance bank.
The number of schools and departments have substantially increased under his inspiring leadership. The Polytechnic under Dr Arimanwa has never failed any accreditation exercise, instead more programmes have been successfully introduced. The Rector has completely digitized operations in the Polytechnic, thereby maximizing time and increasing productivity.

The success of the Rector’s digital revolution made the Tertiary Education Trust Fund (TETFund) to designate the Polytechnic as a Centre of Excellence in Information and Communication Technology (ICT). Only recently, the Federal Polytechnic shocked the world with the invention of an electric vehicle, a super foundry and a spy jet, thus making the institution a centre of attraction.  What may however stand as an eternal legacy for Engr. Dr M.C. Arimanwa is the huge investment he has made in human capital development.

Since the inception of the Polytechnic in 1978, he stands as the only Rector that has conducted the largest staff recruitment, a feat which has given hope to so many families in Imo State and beyond.The CIBN Bankers Hall to be commissioned this Thursday at the Federal Polytechnic Nekede is among the six pilot edifices undertaken by the Institute in the six geo-political zones of the country.

The Polytechnic was chosen among all the higher institutions in the Southeast for its proven record of excellence and consistency in all CIBN’s activities. Remarkably, the Rector has made these twin virtues a mantra in his drive to further make the Polytechnic gain global visibility.
Therefore, as all roads lead to the Federal Polytechnic Nekede this Thursday for the inauguration of the CIBN edifice, it is our prayer that God will continue to bless the institution to attain even greater heights.
Importantly, may the linkage between the Polytechnic and the Chartered Institute of Bankers of Nigeria continue to produce better results. 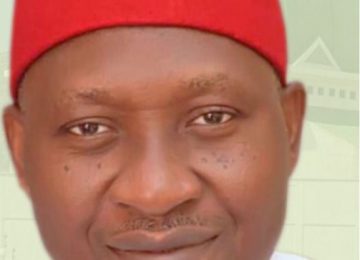