Nigerian Union of Journalists Imo State Chapter has expressed deep sympathy over the demise of Chief Dr Ndudi Nnadi, a veteran Journalist and Coordinator of the International Institute of Journalism, Owerri Study Center whose body will be interred on July 28, 2022 in his hometown at Akpim Okirika Nweke in Ahiazu Mbaise Local Government Area of Imo State.

In a release signed by Comrade Precious Nwadike and Evangelist Austin Okoro as Caretaker committee chairman and Secretary respectively, the Union described the death of Chief Nnadi who also served as Head of Department (HOD) of Mass Communication   of Madona University, Elele, Rivers State as a big loss to the journalism profession in Nigeria, adding that he was a gift, an erudite scholar , a strong voice and a core teacher whose contributions to the growth and development of the media cannot be over emphasized.

According to the Union, Imo NUJ will participate fully in his burial arrangements to pay their last deserving respect to him. The Union also prays for the peaceful repose of his soul.

However, the Union unequivocally stated that, contrary to a recent announcement by one, Mr Chris Akaraonye, an impostor to the union whose criminal activities are now subject of litigations and police investigation, that a substantive coordinator has been appointed to replace late Dr Ndudi Nnadi, stressing that the Union has not made any such appointment.

They inferred that the union is only concerned with according their colleague   a befitting burial, stressing that appointment of next IIJ coordinator is a secondary issue which shall follow due process.

They also stated that the union is consulting with the management of IIJ in Abuja which staff in Imo were sent packing from the Port Harcourt Road secretariat after Mr Chris Isiguzo and his partner in crime, Chris Akaraonye conspired to criminally sell the complex to an ex-governor, adding  that in due course, an agenda shall be set for the school and return of students will follow subsequently.

Posted by Watchdog Newspaper - July 5, 2021 0
The Caretaker of the Imo State chapter of the Nigeria Union of Journalists (NUJ) has reacted to the recent sealing… 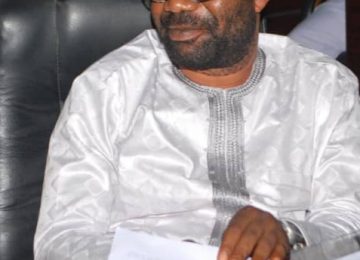 Alleged killing Of Another Youth By Ebubeagu:Oguta Lawmaker, Ugboma Sues For Peace, Restraint

Posted by Watchdog Newspaper - July 27, 2022 0
-Reaches out community leaders for lasting solution Sequel to the alleged killing of one Kelechi Ogbonna, a student of Pricillia…