The House of Representative member for Mbaike Federal constituency, Hon Henry Nwawuba has advised members of  the  Imo state House  of Assembly to trade with caution by shunning any conduct that likely to  portray the hollowed chamber and  state in general  in bad light.

Nwawuba who stated this in a release dated July 11,2021 which copy wass made available to Tuesday WATCHDOG condemned what he described as desecration of the State Assembly, while urging the executive arm to encourage the independence of the Parliament and to provide an enabling environment for its smooth functioning, adding that a vibrant assembly is a sine qua non for a healthy democracy.

The release reads in part,”My attention has been drawn to reports of the desecration of the hallowed chambers of the Imo State House of Assembly by gunshots on Thursday, July 8th, 2021.

“The stories of indiscriminate gunshots,  targeting of specific members and terrorization of staff of the Assembly sends out an ugly picture and projects our state to the outside world as a rudderless jungle led by reckless officials.

“I condemn in strong terms the descent to this Hobbesian state of nature in Imo. The scenario is especially worrisome as it comes at a time the state is recovering from the mayhem unleashed by unknown gunmen  in the recent past.

“A parliament composed of elected representatives of the people is expected to resolve issues by engaging in robust debates, not by the barrels of guns or the brawn of thugs. Each member no matter his political persuasion represents a chunk of our people and therefore deserve to be treated with the dignity and respect deserving of his constituents. I therefore wish to appeal to the leadership of the House to act with a sense of justice to all and with a democratic temperament .

“In conclusion, I wish to appeal to all Imolites to stay calm and support their elected representatives to uphold those values that stand us out as enlightened and industrious people. Imo shall definitely overcome this storm and shall be rebuilt again”.

Posted by Watchdog Newspaper - June 5, 2021 0
–Say:Unions have shown resilience-Done what elected legislators couldn’t do The Imo state lawmakers, elected under the platform of the People… 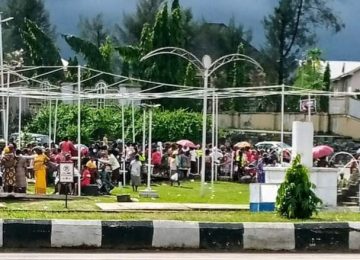 Protesting widows at the government house love garden after dispersed from the gate.

Posted by Watchdog Newspaper - June 22, 2021 0
About 750 widows engaged by the state government to sweep the Owerri metropolis were Monday tear-gased while protesting their six…

Posted by Watchdog Newspaper - July 5, 2021 0
The Caretaker of the Imo State chapter of the Nigeria Union of Journalists (NUJ) has reacted to the recent sealing…