This was the submission of Comrade Charles Nkenna Okafor, an Ideato-born entrepreneur and Chief Executive Officer (CEO) of Revlon Wallpapers & Interiors who added that Barr. Ikenga Imo Ugochinyere Ikeagwuonu represents a breath of fresh air for the good people of Ideato Federal Constituency.

Okafor who is also a youth activist described Barr. Ikenga Imo Ugochinyere, the Spokesperson for Nigeria’s Opposition Coalition and a reputable legal practitioner, as one of the most credible and competent aspirants for the Ideato North and South Federal Constituency seat, going by his antecedents.

In a chat with newsmen recently , Okafor said: “We have endured the rhetoric; we have endured the theatrics, and have accommodated inexplicable level of misrule and misrepresentation. And I wish to state without any fear of equivocation or contradiction, that the Ideato Nation as a people will no longer squander their mandate on bench-warmers. With all we have lost in the recent past, we cannot afford to waste another four years. Ideato Nation cannot be blessed with such competent people as Ikenga Imo Ugochinyere and still be experimenting on misfits.”

According to him, the Ideato Project befits a man who has the intellectual capacity, firmness of purpose and the boldness to make good laws and effectively represent his people.

Okafor further stressed that Ikenga has all it takes in exposure and vast network in the relevant power blocs, to ‘deliver the goods’.

He added that having known and worked with Ikenga for some years, he is in the best position to state the facts about him – his values, virtues and antecedents.

In his words: “Over the years Barr Ikenga has continued to fight for justice and has bravely spoken against marginalization of the Ndigbo. His voice has been loud in defense of the defenseless, even without a mandate or executive portfolio. He has utilized his intellectual and material prowess to impact lives and the society. Ikenga has empowered youths of his community and helped secure appointments for many. The records of his good deeds are visible. He has always had the interest of his people and Ndigbo at heart. We have no doubt that if given a mandate, Ikenga will excel and shine like a million stars.”

Posted by Watchdog Newspaper - August 5, 2022 0
It was a festival of encomium yesterday for the Rector of the Federal Polytechnic Nekede, Engr. Dr. Michael Arimanwa FNSE…

Posted by Watchdog Newspaper - August 16, 2022 0
The Imo state government has reiterated its commitment to deal decisively with oil bunkers in the state and those who… 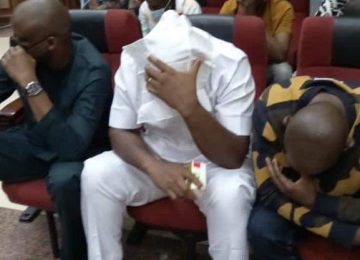 Mr Abba Kyari and two others during court session

Abba Kyari, 6 Others Arraigned In Court

Posted by Watchdog Newspaper - March 8, 2022 0
The suspended, deputy commissioner of police, Abba Kyari wanted by the US Federal Bureau of Intelligence (FBI) for complexities with…